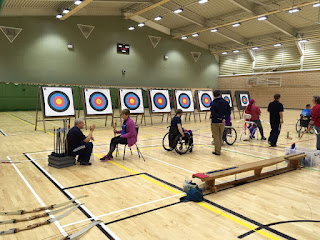 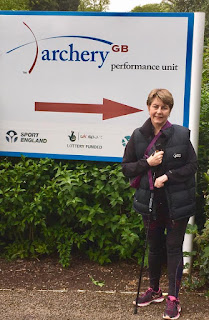 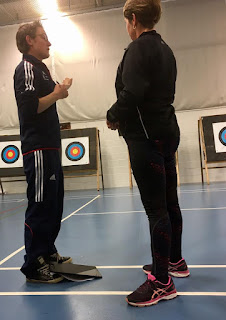 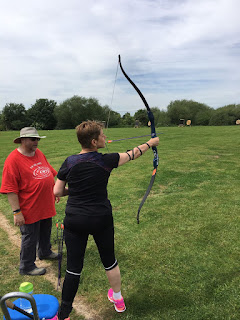 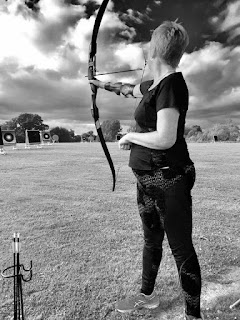 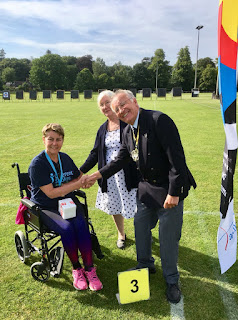 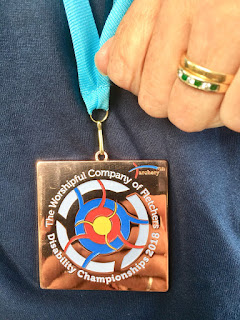 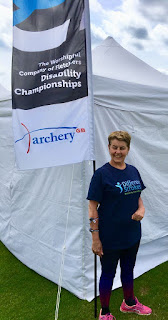 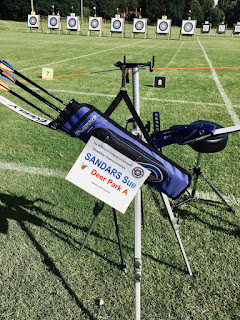 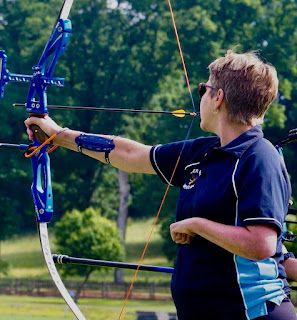 Email ThisBlogThis!Share to TwitterShare to FacebookShare to Pinterest
Labels: ARCHERY 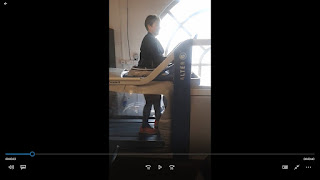 Back on the Alter G treadmill after fracturing my affected left side hip in August 2017!
5 months in recovery including a month in a care home.
Posted by Sue at Wednesday, January 17, 2018 1 comment: 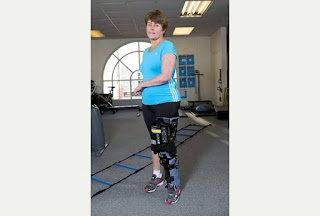 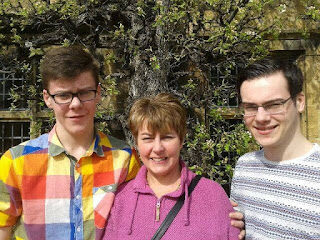 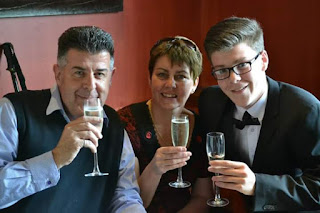 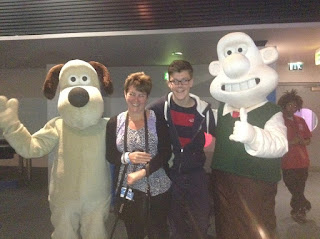 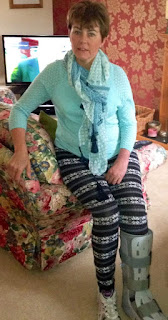 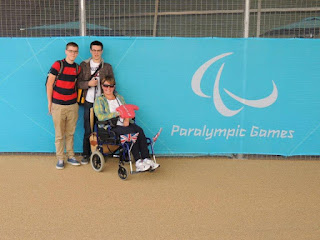 
Ed is doing a great varied week at the Cotswold Conference Centre for his work experience week from school, suited and booted and looking forward to working on reception!
Charles is heading back to University.

On Wednesday I go to our younger stroke survivor network meeting in Gloucester, driving on the motorway again, this time it’s darker and later, we had a good meeting with Perry French and Sarah Miller attending to discuss our future, funding, help from Mel and Louise, and lack of funding to maintain Mel’s role and so she will finish 31.10.12 Avery nice surprise for me too,Perry presented me with 3 certificates, as I had been nominated 3 times by 3 different people for the Life After Stroke awards in recognition of my work helping others. 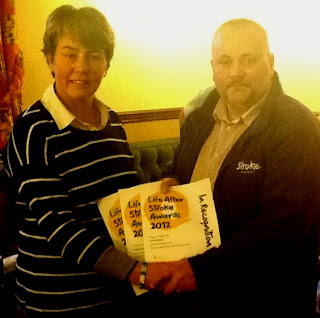 Thursday and I’m back to the JR for a follow up on behaviour testing – not my behaviour!  the behaviour after the research, so I did pegs into holes, beanbag, etc.


On Friday, fed up of waiting for NHS chiropodist I booked to see a private chiropodist in Moreton, it is a corn and quite a deep one behind my nail she scrapes out all the hard skin with a tiny scalpel and oh my God does it hurt, no wonder I have been in pain, she gives me a little protective cushion pad to wear under the toe, to stop it re growing.


In the afternoon I went along to see my befriendee and his partner in Broadwell, they both look well, he is much improving, she has a break booked, they have a referral for OCE and she is keeping her fingers crossed all will be OK.


On Saturday we should have been going on a boat on the Avon from Evesham as a surprise 50th for Jane (Giz) however because of the heavy downpours, the Avon is well up and the river is rather dangerous plus the place where we need to get on is flooded! So Debbie called me and the party is moving to Rose’s house, the weather is lovely, a bright sunny day, really great to see Jane & Jules and we had some bubbles with them to celebrate. 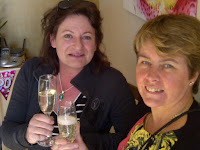 
Dad and Jen O are back from Barbados today, lucky devils, and they’ve had a lovely time, and great weather.


Tuesday and I’m over to St Paul’s in Cheltenham to see the NHS chiropodist, who does a little more cleaning up of my corn, and has referred me to North Cotswolds for a follow up appointment. I then went round to see Dan at the gym but he wasn’t there.


Connect meeting at Hesters Way RC on Wednesday, it went well, a lot to discuss/catch up.


On Thursday I met up with Julie at Dormer House School for a cheque presentation from Xav F for £200 for his charities day presentation about Connect and how we have helped his Dad and family as a befriender. I went to my Doc’s for a blood test afterwards.


Sunday 14th the time has come, after all the weeks and miles of training, Nik has his Liverpool Marathon with Dan’s help and Ed his Wirral10k, we went up on the Saturday and stayed at the Premier Inn, West Derby, not far from where my Dad used to live when he was younger, in fact the site of the hotel he thinks is where my Aunty Marj and Uncle Ken had their wedding reception.
They both did really well, Ed did his 10k in under an hour and Nik did the marathon in 6 hours and 12 mins, I am really very proud of both of them, a great achievement, and I got the chance to meet Richard and the lovely Scarlet. 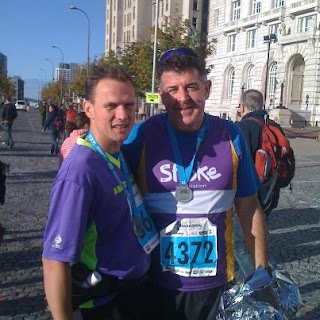 Nik and Dan after completing the marathon, just in front of the Liver buildings.

Between them both Nik and Ed have raised over £3500 for The Stroke Association.
Whilst the boys went off to start at 9.30 Dad and Jen O picked me up from the hotel we drove into the centre parked up and met up with Ed who had got the train back from Birkenhead, with help from Aunty Bary and Uncle Dave.


Charles didn’t bother to turn up having had a late night in Rochdale, nor did anybody else to support them/us, Cath and Dave were busy as were Elaine and Kev, tried to call Jenny twice and no call back received!


I had a really great session with Dan, especially now that my left foot/toe is better and improving, 4 x 5minute bursts on the Wattbike, 10 mins on the Technogym and 10 minutes on the Balance Master.


Wednesday I awoke in the early hours to be quite poorly, first time I’m ‘vommed’ since the stroke so in a way it’s good to know that all things are in good working order!


Friday I went over to see Jannine for a cut n colour, nice to see her for a chat and catch up on things…..! she also did my nails for me and shaped my thumb nail talon!


Ed is on half term this week I have a meeting with Gavin’s old boss Ruth to do some research with her regarding “the experience and expression of social cognition changes for stroke survivors”. We chatted for an hour or so it was very cathartic.


On Tuesday Ed and I went over to Dan, Ed went on the TRX bike and I did 2 x 10 minute bursts on the Wattbike, then hurrah back on onto the alter G treadmill after 2 months of no walking, did 25 minutes, 800m at 2km p hr, very pleased and not too knackered!


Wednesday Andrew was due to come over to make a start on painting & decorating Ed’s bedroom, however he was full of cold and we postponed until Friday…………


Matt, Henry  and Dan are here on Thursday to play FIFA13, my lounge is taken over by hormonal 15 years olds so I work in my office/kitchen!


Friday I am over at the JR to have research follow up MRI scan and some behaviour testing, Nik took me over and we left Andrew and Ed to get on with painting Ed’s bedroom... therein lies a tale, job done sort of, however white paintwork not, so Andrew coming back following Tuesday, paint on carpet, not a good end to the day……
My cousin Elaine who lives on the Wirral, txt me about an article in a free mag they get from the Atogether Now charity and this was it! 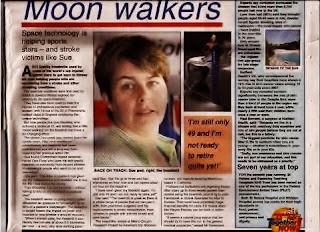 I have applied for a part time job at a local company - fingers crossed, and also applied online to my old Christmas temp job at M&S Simply Food, well I can only give it a go can’t I!
An uneventful weekend, we went to ASK for lunch on Sunday, which was nice, weather not good.
w/c 29th
Monday, a nice early start for me as I’m off down to the office with Nik to discuss reporting on the CRM, it went well, so so nice to be back in an office, this is what I really miss, office banter and daily contact with people.
Andrew came and did the white paintwork. I went over to Dan’s and did 2 x 10 minute bursts on the Wattbike, times/distances/speed improving every time.
On Wednesday I was due to do a chat/presentation about Connect at the Prestbury Centre, however Nik’s turn into A&E for a small problem, so I also missed younger stroke group meeting in Gloucester.
Thursday night we go to Ed’s sixth form open evening at his school, it went very well, we were all pleasantly impressed. Just 2 more to go.
Posted by Sue at Friday, November 02, 2012 1 comment: 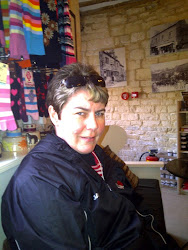